NYK and MTI have received approval in principle (AiP) for an autonomous ship framework that is currently being developed under the name of “APExS.” ClassNK, a classification society based in Japan, reviewed the safety of the framework and certified the concept design on February 20, 2020 the first time for an autonomous ship framework to be approved in Japan. Based on this framework, NYK and MTI will further deepen its cooperation with domestic and overseas partners for the development of autonomous ship technology that contributes to advanced safe operation.

It is said that about 80% of marine accidents are caused by human error, particularly insufficient watch-keeping and errors in ship maneuvering. In the past, we have worked to reduce these types of incidents through our safety management system (SMS) and BRM.* However, progress with computer technology has made it possible to further improve safety by combining the strengths of human experience with the attributes of computers. In this regard, we have developed a new operational system that achieves a high level of safe operation and assists vessel operators by making use of Maritime Autonomous Surface Ships (MASS) technology, an R&D project conducted with domestic and overseas partners.

APExS is an acronym for “Action Planning and Execution System.” This framework for the realization of Maritime Autonomous Surface Ships (MASS) includes high-speed computer-based information processing technology and risk analyses that support crew members’ situational awareness and the decision-making necessary for maneuvering. In fact, the computer will execute maneuvering operations under the crew’s approval. 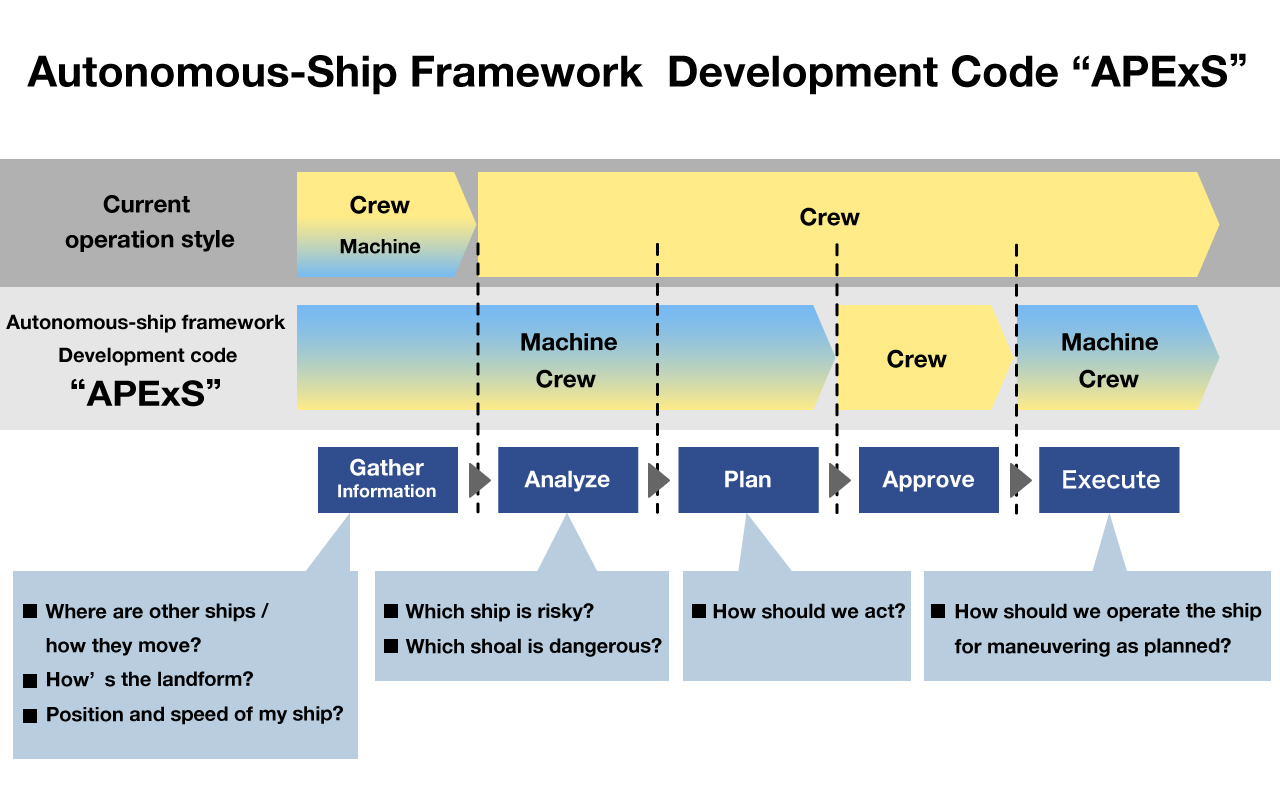 About Approval in Principle (AiP)

To develop an autonomous ship framework, NYK and MTI have been working with ClassNK to verify the safety of system usage conditions and fallback systems. With respect to communication concerns between humans and computers, risk can be mitigated to an acceptable level and human error significantly diminished through proper design, procedures, and training. After confirming all this, we were able to achieve the standard set by ClassNK and receive certification for the concept design.

* BRM (Bridge Resource Management)
A concept to minimize human errors by enriching communication and cooperation among crews, and the use of all available information from navigation instrument that can be used for to improve situation awareness, and decision making within the bridge. Introducing BRM to bridge operations and training crews of its use is mandated by the IMO STCW Convention.

Link to the Class NK’s announcement on May 14, 2020: ClassNK grants AiP to NYK Line and MTI for their joint project on the concept design of an autonomous ship framework

Announcement on June 6, 2019: MTI joined One Sea, a maritime ecosystem aiming to realize autonomous ships, as the first member from Asia

Announcement on March 12, 2019: The NYK Group Develops System that Assists with Vessel Berthing

Announcement on August 10, 2018: The NYK Group Companies to Participate in Demonstration Project to Remotely Operate a Ship