Development of autonomous ships, energy-saving, zero-emission ships to be accelerated

With priority on “openness” and “globalization”

MTI, an R&D arm of the NYK Group, plays a core role in developing advanced technologies that support the group’s “digitalization and green” business initiatives. In a recent joint interview, Ishizuka and Ando talked about the group’s maritime activities, including autonomous navigation and energy-saving, zero-emission ships, drawing on the current state and future prospect of technological development.

– What R&D themes does MTI address on a priority basis?

Ishizuka: First one is fuel reduction. This is a theme the NYK Group has long been tackling. We look to deepen our fuel saving in response to the rise of fuel cost resulting from the IMO’s tighter SOx rules that came into force on January 1, 2020. Another theme is autonomous ships. Trials of the technologies are beginning initially on coastal vessels. Such trials start almost simultaneously not only in Japan but globally including Norway in particular. We think this movement will spread to oceangoing vessels sooner or later. We need to keep updated with the ongoing progress concerning ship-land telecommunication technologies. We are also grappling with the enhancement of condition-based maintenance (CBM) for ship machinery. Regarding logistics-related technologies, we are working on a project to maintain the freshness of sweet potatoes for export through an onboard curing process, which requires the adjustment of oxygen and carbon dioxide concentration in the container as well as that of air humidity. We are strengthening our activities from the viewpoint of globalization. Our branch office in Singapore arranges maritime R&D contracts and we are about to participate in a project supported by the country’s Maritime & Port Authority (MPA). In 2019, Dr. Ando has actively expanded our partner networks in Europe with Norway as a hub. Also, MTI became the first Asian member of One Sea, a Finland-based international eco-system aiming to lead the way toward realization of autonomous ships in 2025.

Ando: As to oceangoing autonomous ships, we have been focusing on manned-autonomous ships as a feasible target, since it is clear that hurdles are quite high for unmanned ships because of safety and maintenance. However, I am currently having
an impression that such directions are gaining more supports from other players including Europe. We think that variety of situation-awareness and decision-making support systems for oceangoing and coastal ships will emerge first. Then, challenges that we recognize will be that manufacturers, shipowners and classification societies will need to use technologies with proper understanding of the limitations of them so that total safety may not be impaired by sensor error or malfunctions of the system. Who should take the role and responsibility of system integration remains is unavoidable question when realizing manned-autonomous ships.

■Cultivation of IT experts

– What results have your network expansion activities in Europe brought about?

Ando: It has been generally said that Europe has taken the leads in the development of autonomous ships. One of my purposes was to understand the situation. I had met with people from manufacturers, classification societies and regulators particularly in Norway. I found that the development of the technologies have not yet been completed as a whole, and many issues remain. Not a few technical experts have common views on remaining technical challenges. However, that was true that in Norway, the maritime industry was at relatively
higher position among other industries and the industry could gather talents who once had worked at top-level IT companies and were then getting jobs at maritime companies. I was impressed that such IT experts were accelerating the digitalization of the maritime industry. Through communications with such people, I could have clear image that we should better collaborate on some of the core technologies with IT industry and also on some other technologies, which we cannot find in Japan, with global partners.

Ishizuka: As for global networks, MTI began a three-year joint study in 2016 with the University of Southern California (USC) about autonomous navigation simulation. The project ended in 2019, but we will participate in more joint studies with the university in the future.

Ando: Our next joint study with USC will last for the next four years. Our primary purpose will be the cultivation of personnel who have knowledge and skills of advanced IT and AI. If the Japanese maritime industry has such core people, we will be fairly competitive. I think 10 of such experts will be necessary at least. As far as the applications such as evaluation of collision risks and collision avoidance, Japan have competence and we want to take initiatives in such areas. We will join forces with marine equipment companies, shipyards and classification societies in fostering personnel who can handle such highly technical subjects while studying the trends in other industries including automotive industry.

– One of our projects in 2019 was the development of a cyber-risk management system
for ships. The NYK Group jointly launched this system with the Norwegian IT firm Dualog and the Norwegian government fund Innovation Norway.

Ando: We have jointly developed a software platform for telecommunication with Dualog for nearly three years. We have conducted trials on some 15 vessels and we now see good prospects for ship-shore data sharing. In addition, we have agreed to work on strengthening cyber security in the next two years. An era of constant high-speed communication for ships will be rolled out as a result of the revolution in telecommunication technologies such as LEO satellite systems. So, we are building a secure data communication platform to enjoy the potentials of such communication revolutions.

– Did you see any progress on horizontal initiatives in the shipping industry in 2019?

Ishizuka: It has been one year since the IoS-OP (internet of ships open platform) was launched in Japan. The next step we must take is globalization. We hear that several foreign companies have already raised their hands to join it. We are fully prepared to support such moves.

Ando: We are also putting a priority on standardization activities. The Smart Ship Application Platform Project of the Japan Ship Machinery & Equipment Association (JSMEA) is about to propose the revision of three standards and one new standard to the International Organization for Standardization (ISO). So far, new technologies have been brought to Asian nations from Western nations, however, in the area of digital technologies, the U.S. and China are competing as you can observe them in the number of patents, South Korea has strength in IT. While attention is being given to digitalization of the maritime industry are gathering attentions, I think that there are fierce competition and the situation looks chaotic now. Each nation are strategically engaged in new digital industry development race with slightly difference scopes. Research and development projects supported by government used to be focused on product developments. Now, however, I can observe clear shift that one of the goals of such R&D projects contain standardization. From users point of view like us, actually this is preferable trend. System integrators are important, but from the standpoint of ship operators, we have clear preferences for open system rather than black-box system. We will continue to appeal the necessity of openness and standardization for computer systems. Otherwise, a newly developed very good technology may ends up as just a demonstration or it will not become prevalent as the system is too expensive for merchant ships. The Japanese maritime industry have managed to get to the present stage without existence of dominant system integrators, because shipyards could have select equipment and machineries from multiple options and they have integrated them. It has been possible due to openness of each components. Even in an era of digital system, it will be all similarly important for us to realize a safe and efficient maritime transportation by having open systems.

Ishizuka: European system integrators are taking close strategy. I have an image that they are vertically integrated within their corporate group. However, from the viewpoint of users, open systems are desirable.

Ando: When I talk with engineers in Europe, I find many of them are also in favor of making their systems as open. Especially, those who have joined the maritime industries from the IT industry know quite well about the merit of open systems. However, openness means commoditization in a sense. Therefore, it will be difficult for large system integrators, who need to sell package of their products to accept such open approach. But there are some European system integrators who think that open system will be better than closed system, because it is difficult to create market in case of innovative products even for big OEMs, and it might be strategically better to expand users first with an open approach.

– What approach do you take toward the IMO’s greenhouse gas emissions reduction goal?

Ishizuka: In 2019, we announced “NYK Super Eco Ship 2050 (SES 2050)”, an environment-friendly concept ship that the NYK Group aims to develop by 2050. NYK SES 2050 incorporated element technologies such as liquid hydrogen fuel cell into the ship to make it emission-free. Amid the big social trend toward decarbonization, zero-emission ships are naturally an area in which we will focus greater attention. For the IMO’s 50% CO₂ emissions reduction target to be achieved, there should be a realistic premise that a good number of zero-emission vessels will be in operation by then. To make that possible, a prototype of such ship may have to be developed by around 2030. Our understanding is that the world will move in that direction. We said earlier in this interview that autonomous navigation will start with coastal vessels rather than oceangoing vessels. This will also be relevant with new fuels.

Ando: There are four research themes we need to address in the 2020s to realize zero-emission ships. The first one is electrification. The second is about energy carriers for hydrogen including fuel cells. The third is improvement of propulsive efficiency. This is an eternal challenge for ship design. The last one is digitalization. For example, when we build a hybrid ship, we need to resolve optimization problems such as size of battery in each project and digital technologies play important roles there. We think hull shapes also need further improvement. By using measurements of not only model-scale tests but also actual full-scale ships, we can build a ship that has optimum design with required performance on full-scale basis. Alternative fuels have lower energy per unit volume compared with heavy fuel oil. Therefore, energy-saving technologies are quite important in order to make fuel tanks and batteries smaller in volume. We want Japanese shipbuilders to make continued efforts in this area. We will actively cooperate on these subjects by utilizing existing data-sharing frameworks at IoS-OP and ShipDC.

– Which alternate fuel will be influential?

Ando: We think LNG will be a long reliever for a while. As to the next reliever, it will be important for us to take part in many projects including even very unusual ideas and accumulate our experiences there. Wind power was not incorporated into our SES 2050 because it will be far from viable under constraints to operate ships at 19-20 knots as same as the benchmarked car carrier. However, we think opportunities for use of wind power for ships if there are shippers who will accept ships that run at less than 10 knots.

Ishizuka: We think that which alternate fuel will be promising in the future may remain flexible, because that will depend on environmental regulations, cost, business models and regional factors. MTI will propel various R&D projects in preparation for zero-emission ships. 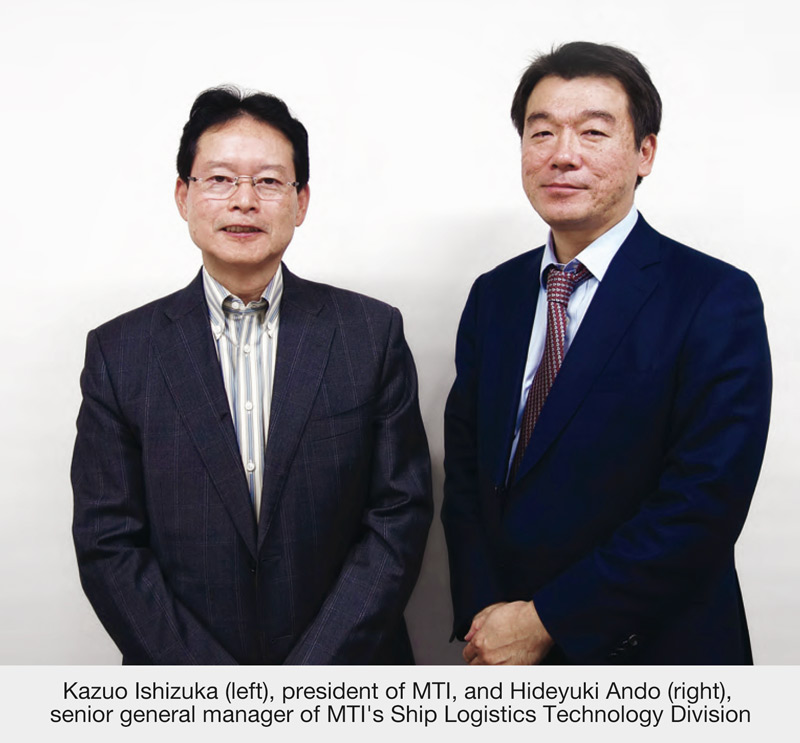