Since February 2018, I have been loaned to MTI and am mainly engaged in R&D projects for better communication between ships and land for transferring the collected IoT data to land and in work related to the infrastructure for utilizing that data. Since 2008, NYK and MTI have collected, calculated, and sent sensor data of ships via data-collecting equipment called SIMS (Ship Information Management System.) At the beginning, the function is only collecting data, but after the data visualization is realized, recently the data is utilized for detecting anomalies in machinery and preventing accidents. It is expected that the development of applications utilizing the SIMS data will be further accelerated in the future. One of my main tasks is to build the infrastructure required for those applications, which will contribute to the safe and efficient operations of NYK’s oceangoing ships. 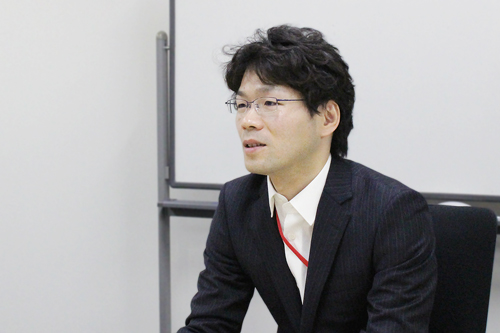 I’m involved in a project called “onboard application distribution platform,” which aims, from land, to remotely update onboard applications and manage the current situations of ships at sea. The concept is like the installation and updates of smartphone applications on board. At first glance, people might think that this can all be realized as easily as ordinary application distribution sites do, but in fact the situation is completely different. From the viewpoint of the land side, the onboard application distribution platform is a client, but it also can be a server because the onboard application can be used by multiple users or related devices. It is not a one-to-one device that only one user uses, like a smartphone. In addition, some circumstances are peculiar to ships. For example, as the onboard communication speed is slow compared to the on-land communication network, it is better to send data by compressing it as much as possible. Outside of the satellite cover area, connections can lag, so there is a request to automatically stop transfers and restart them when the cover area has been reentered. Further, even if it is not a pure OT, operational technology, the measures for cybersecurity and certain reliability as a device will be required in the future, because the platform integrates and handles ship data.

So, why are there so many requests for remotely doing something? That’s because, there are lots of differences from land-based industries. On land, even if something goes wrong with a device or if an application or firmware needs to be updated, it is easy to access in terms of communication between devices, physical distance, and interpersonal communication. But for ships, once a ship departs, it might not call for more than a month, so access is difficult in all respects and some changes and work come only at a great cost. By May 2020, COVID-19 already had an overwhelming influence in Japan and worldwide. Even if the virus is managed and life becomes more normal in the future, remote work will increase. For reducing risks of spreading infection by reducing ship visits, it is anticipated that there will be more and more requests for getting ship applications without visiting ships.

In this situation, and in collaboration with the NTT Group, NYK and MTI have conducted PoC (Proof of Concept) of application-software distribution. In fiscal 2018, we sought improvement measures for the issues identified in the fiscal 2017 PoC. And in fiscal 2019, we performed PoC again based on the improvement measures and were able to remotely install, update, start, stop, and delete application software. In addition, when updating, we have newly implemented a difference distribution function that reduces the amount of transfer by sending only the necessary difference, thus improving compatibility with ship and land communication. Moreover, by providing an update function for the onboard application distribution platform itself, even if a bug occurs or a function update of the platform itself becomes necessary, it is now possible to respond without visiting a ship. In fiscal 2020 and beyond, we will continue research for practical use by deploying the platform to multiple vessels and developing unimplemented functions. 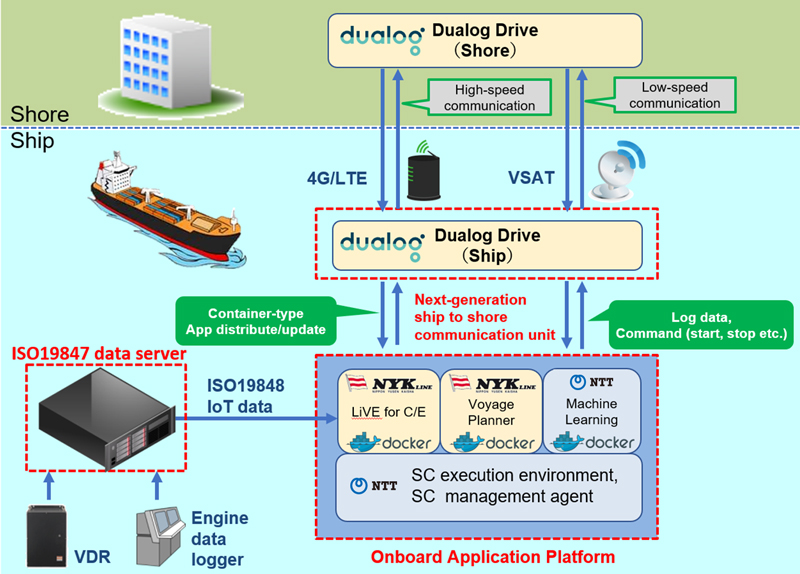 Configuration of the IoT data platform PoC conducted in fiscal 2019

The above-described onboard application distribution platform needs a data-collecting system like SIMS as a data source. In recent years, data servers compliant with ISO standards have become available. In addition, to meet requests by charterers, the deployment of VPMS made by marine equipment manufacturers has increased. It is expected that VPMS other than SIMS will be deployed on ships in future. NYK and MTI have premised SIMS for data-utilizing infrastructure, so in future we need to build a system that can cope with any VPMS and can utilize data at the same level as before on board and on land, and currently we conduct R&D on that. Already, utilization of data from some VPMS made by other companies has started, and the data contains data that is not included in SIMS, so by continuing this R&D we expect a new solution can be found. 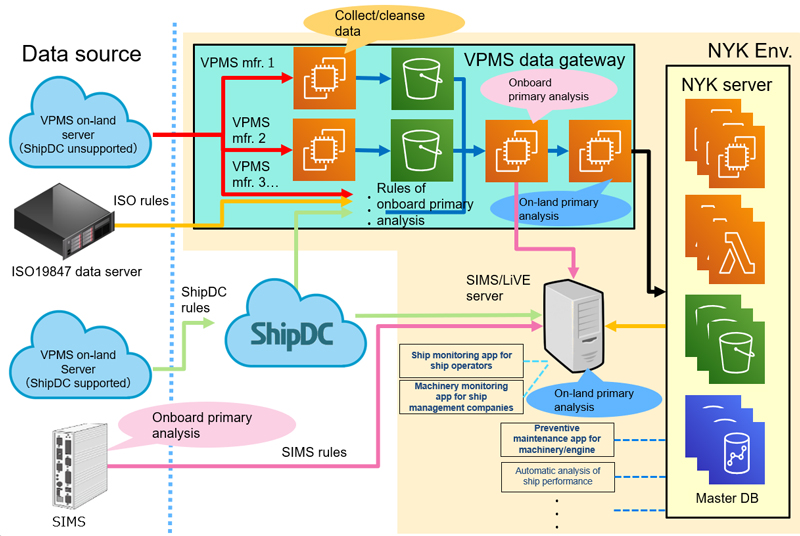 But, if we utilize those R&D results only within NYK and MTI, the technologies and products might be overly specialized and not contribute to the whole maritime industry’s development. There are always killer contents that influence product survival and determine which product will finally dominate an industry. Such successful products have a power to change the current situation at once. NYK and MTI develop applications but cannot by ourselves cover all contents. For example, even a video game console that sells over 100 million units worldwide will suffer from a lack of contents if other game companies cannot make software that takes advantage of the console’s features. Thus, it’s important to make friends for standardization while listening to everyone’s opinions.

So, we work together with Ship Data Center, which is a subsidiary of the Japanese classification society ClassNK for the IoS (Internet of Ships) concept, and the effort has led to two important standards: ISO19847, on the functions and requirements of onboard data servers, and ISO19848, on data standardization of ship machinery and equipment. In future, we must consider how to make the standards really used by users. In addition, I think standardization of ship-to-land data communication and of the onboard application distribution platform are both needed so that onboard data utilization is the same as on-land data utilization. 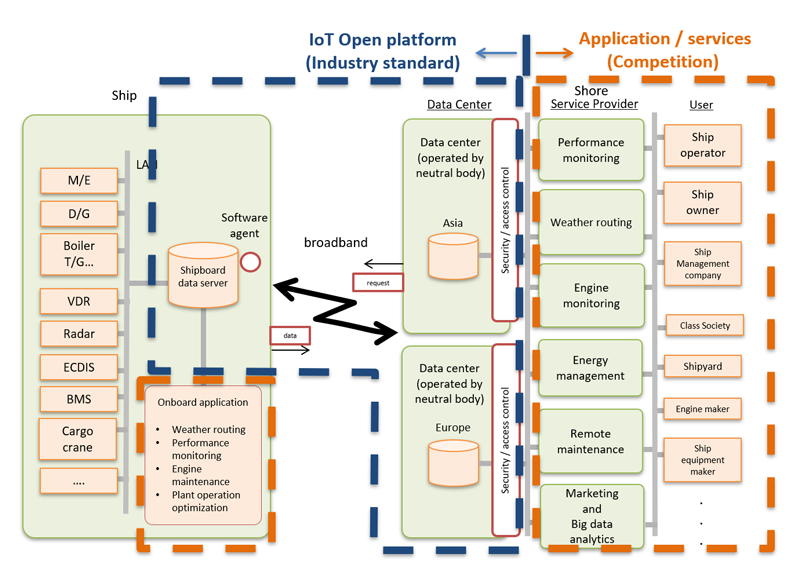 Open platform for the maritime industry

Through the R&D projects, we have worked hard for realizing user needs, but I think that the environment surrounding the infrastructure is more complicated due to the above-mentioned circumstances peculiar to ships. For onshore plants, optimal solutions are built using cloud, fog, edge, and such computing for each manufacturer. But onboard, when, for example, we detect anomalies by machine learning that utilizes real-time data, it seems that edge computing should be used. But it is then difficult to send the collected high-granular learning data to the land side. Even if learning data can be collected, cloud computing that constantly sends and processes high-grain real-time data from all ships is not realistic. Then, is it enough just to send the thinned data to the land? No, because there is also a need for land operators, navigators, and engineers to immediately see detailed data before and after the event when an abnormality occurs on a ship. In addition, there is also a need to talk directly while looking at the same screen of the same application on board and on land. For land-based industries, it seems that it can be done by building a suitable system for each. But for the maritime industry, although the surrounding environment such as low-earth-orbit satellites have gradually evolved, building a system considering the unique circumstances of ships is troublesome and difficult.

Like this, I feel that it is difficult but interesting to think about the path to industry standardization for making the ideal form of the onboard platform, ship-to-land communication, and on-land platform so that class societies, manufacturers, shipping companies, and all stakeholders enjoy a win-win outcome.