In September 2018, I was loaned from the shipyard to MTI, and I have been working on research to promote energy-saving operation of ships. Due to the threat of global warming, we need to further improve energy-saving technology, e.g., by gradually strengthening regulation of exhaust gas from ships in international shipping, and in the NYK Group, we are working to reduce the environmental impact of ships in terms of both hardware and software factors. This article introduces efforts to improve the performance of propellers—i.e., the equipment used to convert rotary power output from the main engine to ship propulsion power.

The smaller the area of the propeller blades, the smaller the area which contacts the water current during rotation, and the lower the resistance which the blade receives from the water current, and thus it becomes easier to develop high-efficiency propellers. However, it is known that reducing the blade area increases the amount of cavitation, and the impact pressure on the blades when cavitation bubbles collapse near the blade tip, and this is known to result in an increased probability of erosion (cavitation damage). Also, when we look at the erosion that occurs at the blade tip, there are people who feel that structural beauty is lost, and people who worry that the propeller blade may break if erosion progresses. Therefore, there is a need for propeller designs where erosion does not occur. 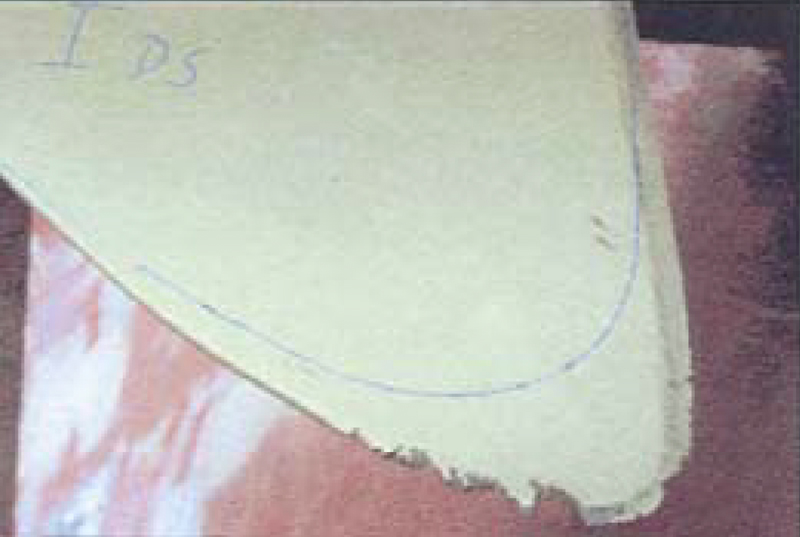 Example of erosion on the propeller blade tip

As part of efforts to prevent erosion, model propellers have been fabricated when erosion was discovered on the propellers of ships in service, and the situation from cavitation appearance to collapse was observed in cavitation-tank test using the model propellers. In this way, previous researchers have accumulated data on the characteristics of cavitation which has a high probability of producing erosion. Also, in current propeller design, it has become possible to simulate, at high precision, the situation from cavitation appearance to disappearance in cavitation-tank test thanks to the development of CFD (Computational Fluid Dynamics) computation, and this enables design of high-efficiency propellers that do not erode. Under these design conditions that do not allow erosion to occur, it is difficult to further improve efficiency of current propellers, and thus we need to consider new approaches.

As one such approach, NYK and MTI are conducting measurements on actual ships*1. Thus far, we have conducted observations by producing cavitation in model testing, but there have been questions as to whether the cavitation which occurs on the propellers of actual ships is being reproduced accurately. There is a possibility that there is a difference between cavitation in model testing and cavitation on an actual ship, and there may be some leeway for further improving the efficiency of current propellers. Also, cavitation testing using model propellers can also be carried out by the propeller designer, by requesting it from a testing body with specialized equipment, but observation of cavitation on an actual ship cannot be carried out by the propeller designer alone, and it must be done in collaboration with a shipping company and the manufacturer. Therefore, NYK and MTI have conducted measurements on actual ships together with shipyards and instrumentation manufacturers. As a result, propellers with higher efficiency than conventional types have been designed by improving the precision of CFD computations for actual ships, and looking again at propeller design. Going forward, we will strive to develop high-performance ships by conducting measurements on various types of actual ships, accumulating results, improving the precision of CFD calculation on the scale of actual ships, and conducting overall optimization of ship types, energy-saving devices, and propellers. 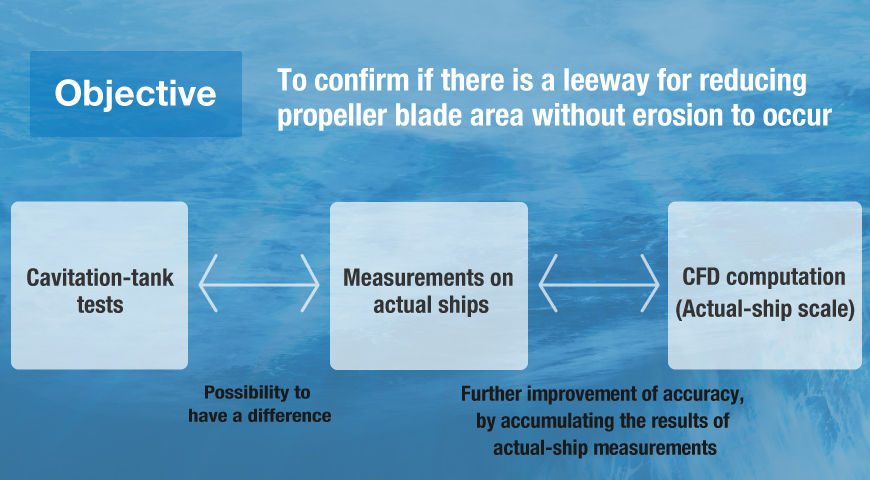 What Will Happen If Erosion Is Tolerated?

Previous thinking has been that it is not desirable for erosion to occur, but allowing erosion to occur provides leeway for reducing propeller blade area, and the possibility of making current propellers more highly efficient comes into view. NYK and MTI are exploring that possibility together with Nakashima Propeller Co., Ltd. and Imabari Shipbuilding Co., Ltd., with a special focus on car carriers.

Next, if the blade area is made smaller than current propellers, then the amount of cavitation increases, and there is also an increase in pressure fluctuation due to cavitation appearance and disappearance, and thus there were concerns that this would be a factor causing hull vibration. Therefore, the impact on hull vibration due to an increase in the amount of cavitation was estimated by using the shipbuilding technology of Imabari Shipbuilding Co., Ltd. Also, an investigation was carried out of the effect on the propulsion shafting system of a reduction in propeller weight due to reducing the blade area. The results showed that there is low probability of problematic hull vibration, and that effects on the propulsion shafting system are at a tolerable level.

Going forward, our plan is to convert the propellers of in-service car carriers to these high-efficiency propellers, and check whether the magnitude of erosion at the tip and improvement in propeller efficiency is as estimated.

What’s Next After Improving Propeller Efficiency?

By reconsidering, in this way, the conventional thinking that occurrence of erosion is undesirable, the possibility has come into view that fuel consumption and gas emissions can be reduced by installing higher-efficiency propellers.

The International Maritime Organization (IMO) set a target in 2018 of reducing greenhouse gas emissions by at least 50% by 2050, taking emissions in 2008 as a baseline. It is unlikely that this target level can be achieved by extending today’s technology, and I believe we need to reconsider today’s conventional thinking. There is also a possibility that propellers will change to another propulsion system in the future. This sort of change affects all aspects of ship design, manufacturing, operation, and maintenance, and thus studies cannot be done by either a shipping company or manufacturer alone. They must be done through collaboration by both sides. As we have seen in this article, a great deal of MTI research—i.e., technology R&D for the NYK Group—is done through collaboration with partners outside the company, and for operations at MTI, I feel there is value in work with the potential of making a major contribution to moving us a step closer to a better society. 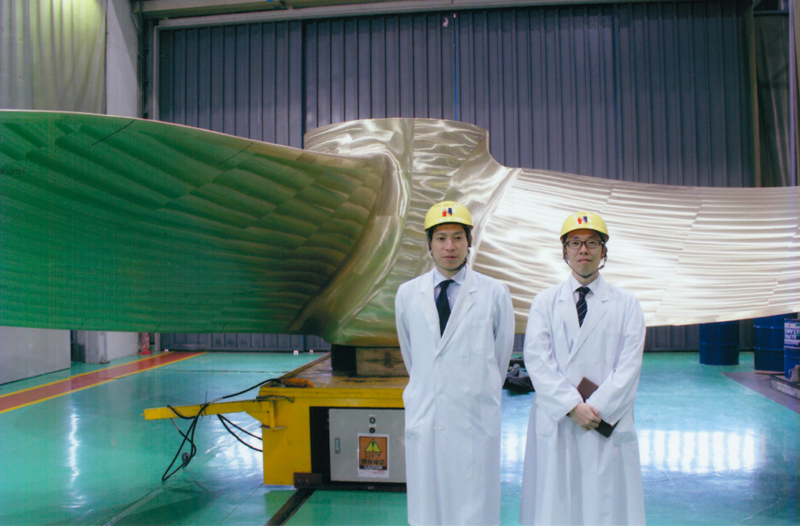 *2 “The Specialist Committee on Cavitation Erosion on Propellers and Appendages on High Powered/High Speed Ships Final Report and Recommendations to the 24th ITTC”, Proceedings of the 24th ITTC – Volume 2, pp.509-542, (2005)