*The job title is as of the publication date

Around the end of summer 2013, we received an inquiry from the sales department of containerships in Singapore: “Can you do something with a vessel whose performance is 20% worse than that of a same-size chartered vessel?” Some research soon found that the ship had been operated under conditions different from the design point. Therefore, we proposed the possibility of a 20% improvement if we redesigned the ship shape and such to suit the current usage conditions. We decided to conduct a retrofit because we verified the cost-effectiveness and found out that early cost-recovery is possible. Around that time, such retrofits had been conducted only among the overseas shipping companies, and it would be the first trial among Japanese shipping companies.

In general, containerships operate on fixed routes in a loop as pre-scheduled beforehand and at pre-fixed speeds. The draft is set to match the cargo amount of each route, and the hull form is designed and built by ship-building companies to perform best at the assumed ship speed.

At that time, soaring fuel-oil prices and new entrants from other industries had caused a surplus in the supply of vessels; thus, vessel speed reduction had been promoted. Because there were excess vessels, the schedules themselves were also changed. In addition, because the cargo amount changes in line with business fluctuations, after vessels are in service, they are often operated under conditions different from the planned ship speed and draft. So this is a trial for reducing fuel cost by optimizing hull forms tailored to actual operational conditions. 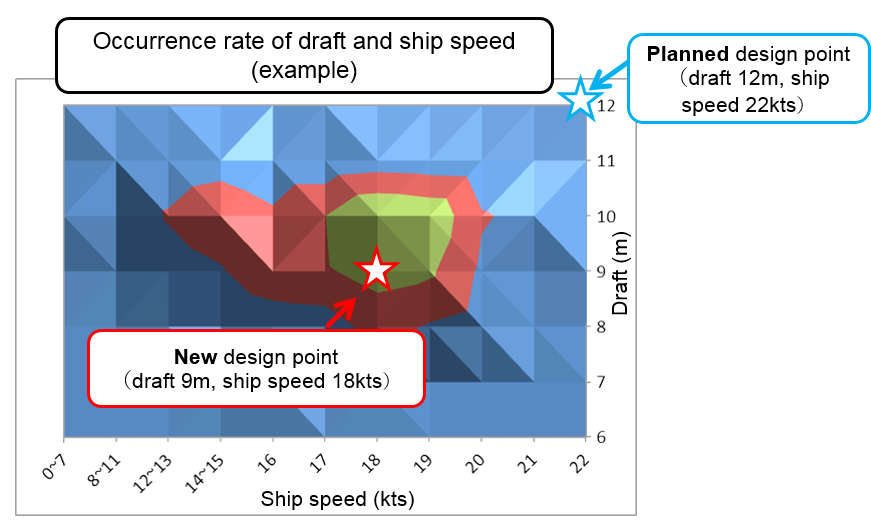 Setting the new design condition based on the operational profile (draft, ship speed)

With the speed of the sales department

Once the project started, it proceeded much faster than many other development projects, for it had a direct influence on the sales department’s cashflow. Although in autumn it was uncertain if the project would actually be conducted or not, it was quickly launched in early winter and the towing-tank tests conducted at the end of 2013. At the start of 2014, we received a green light for the retrofit; so, we prepared the ship plan in time with the docking schedule in spring, and then we coordinated the schedule and such with the shipyard and managed to be in time for the construction – it was a hectic half year.

Let me here introduce the review work of the optimal hull form. The below picture shows a tank test with a six-meter ship model. After utilizing computer simulation to narrow down the candidate hull forms, we create large-scale models like the one shown; then the models are towed in a big pool-like tank, so that the optimal hull form is selected. Such tanks can be up to 400 meters long.

For reducing the hull resistance and for energy saving, there is a spherical object called a bulbous bow at the fore end of ship. As shown below, when a ship runs, waves are created by the hull; then, they are canceled out by the waves created by the bulbous bow. Waves created by ships or bulbous bows vary depending on the ship speed and draft, so if the operational conditions are changed, there can be a possibility for optimization. 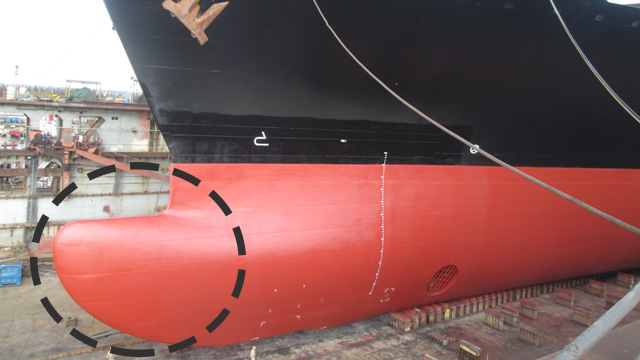 Relationship of waves created by the conventional bow and the bulb

Going back to the tank-test picture, at the upper side, under the planned conditions the waves created by the pre-retrofit bulbous bow were small and the hull form was close to the optimum on the left. On the other hand, at the lower side, under the actual operational conditions, by changing to the retrofitted one on the right, the waves created became small. As we confirmed the expectation of reducing resistance and fuel costs to some extent by the tank test, we decided the ship shape and created the ship plan.

Dozens of retrofits were conducted in about two years

In general, it takes about a half year for the preparation of one ship shape, and takes a few months from the preparation to the retrofit construction. But this time, there was no room for sitting back and relaxing, as we conducted dozens of retrofits for many ship shapes in about two years.

We conducted a few kinds of retrofits for dozens of ships, which means we needed to arrange in total about 100 constructions. All preparations were conducted in the same period, so there were a huge number of documents and email exchanges.

As we cannot have any influence on the services, we carefully checked on the progress and felt tense, but some ordering and arrangement mistakes occurred both internally and externally. Nevertheless, fortunately and impressively, we were finally able to recover thanks to the close coordination of the NYK Group and the external cooperators such as manufacturers.

Moreover, this project was the first trial among the Japanese shipping companies, which means that this was also the first experience for the Japanese classification society, so that we confirmed and arranged each item carefully. It seems that some items were difficult to judge by the existing regulations, but with their attentive and flexible support, we were able to complete the project as scheduled. It would not have been possible to carry the project toward success without their support. 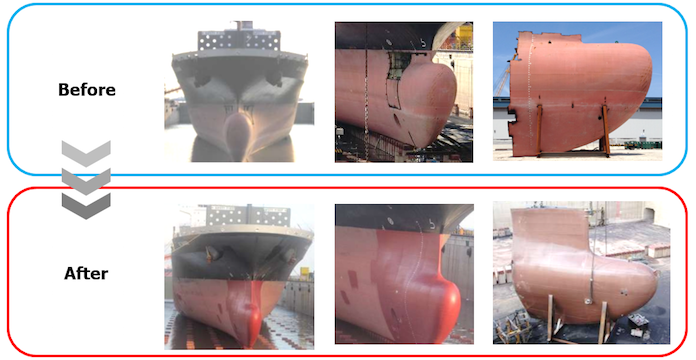 Although the content of retrofit constructions varies from ship to ship, we were able to confirm about a 20% fuel-saving effect. The speedy realization of the idea to change ship shapes in response to economic fluctuations had no precedent in Japan and was a characteristic accomplishment for MTI, which is close to the actual sites, and a result of the NYK Group’s great teamwork. 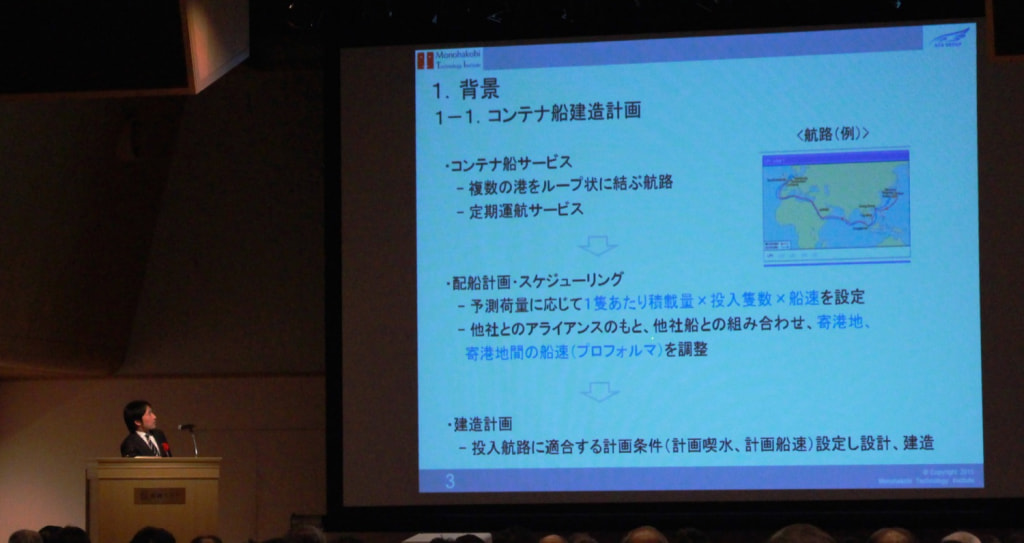