Aiming for Further Improvement of Propellers

Propellers are important parts for propelling ships. Depending on the propeller performance, ship performance will greatly change. Therefore, for building more high-performance and energy-efficient ships, we need more improved propellers, which are designed by shipyards or propeller manufacturers. For designing, they check the propeller performance by considering ship type, the expected ship speed, and the main engine speeds of target ships, and derive an optimal propeller shape by using towing tank tests or CFD (computational fluid dynamics). As high-performance ships are expected these days, designers are striving to improve propellers by even one percent day to day.

Why can’t towing tank tests and CFD simulate the actual sea conditions? That problem is related to the size of objects. First, when we conduct a towing tank test, obviously actual ships and propellers cannot be used, for they are too big. Therefore, we use scaled-down models for the test. But the size difference between a model and an actual ship affects the flow field – the water flow near the ship and the propeller. So, the flow field of a model and that of an actual ship differ, which difference is called the “scale effect.” When the estimated accuracy of scale effect is low, propellers might not be able to demonstrate the expected power to propel the ship. 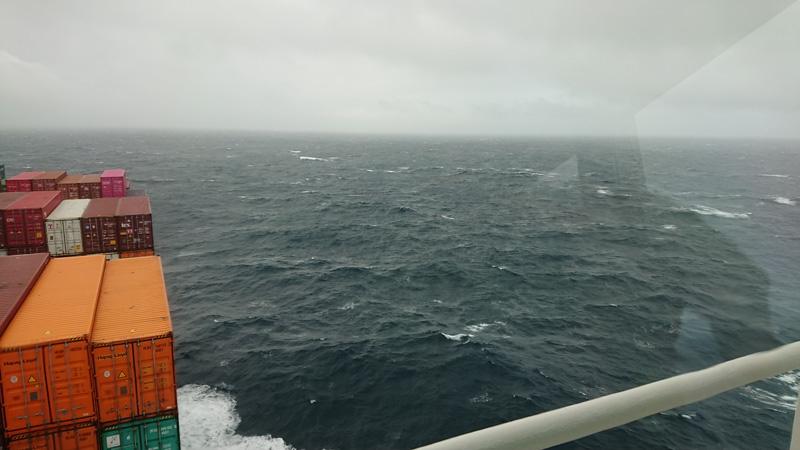 An ocean-going ship in the actual sea, a world that cannot be anticipated only by calculation

This time, we were able to verify the CFD for the actual ship scale (in the orange frame)

It is impossible for a shipping company alone to measure and analyze actual-sea conditions. The knowledge of shipyards, which design ships and propellers, is essential for considering optimal measuring points and reflecting measured results to designing. Further, without the cooperation of the measuring-device manufacturer, we cannot adjust the device and analyze the data.
So, NYK and MTI started a joint research project with JMU, Japan Marine United Corporation, and Furuno, Furuno Electric Co., Ltd., for measuring the propeller operating conditions in actual sea, targeting 14,000 TEU containerships.

Under this joint research, each company cooperated toward the same target. JMU decided the layout of equipment and installed the equipment to a newbuilding. NYK and MTI coordinated the whole project planning and development and installation of the measuring equipment, and also proceeded the measurement without any trouble while coordinating with the actual site for preventing any ship delay and confirmed whether all the required conditions for the measurement were met. 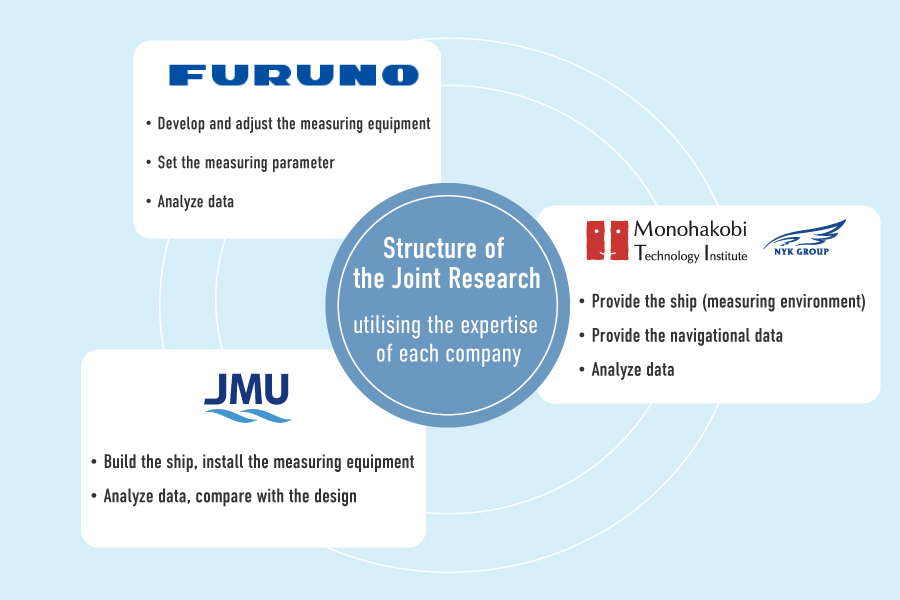 After the ship was delivered, engineers from each company embarked on it and measured the conditions of propeller movement in actual sea. Measurement here mainly refers to measurement of the stern flow field, observation of the propeller cavitation, and measurement of fluctuating pressure on the stern. 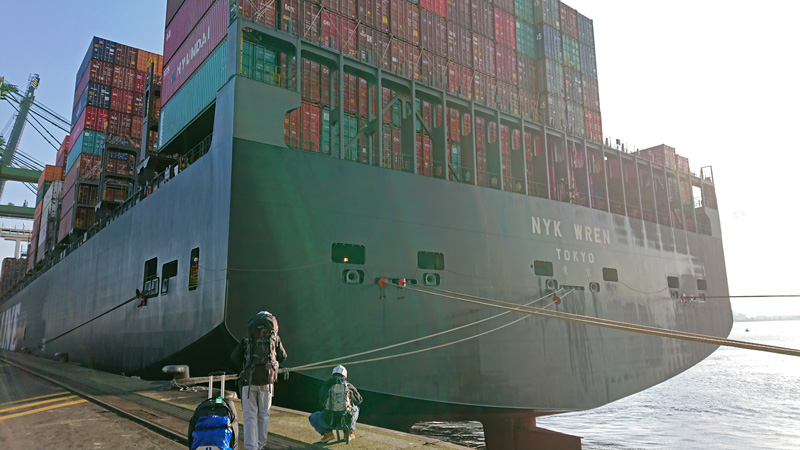 Just before the embarkation 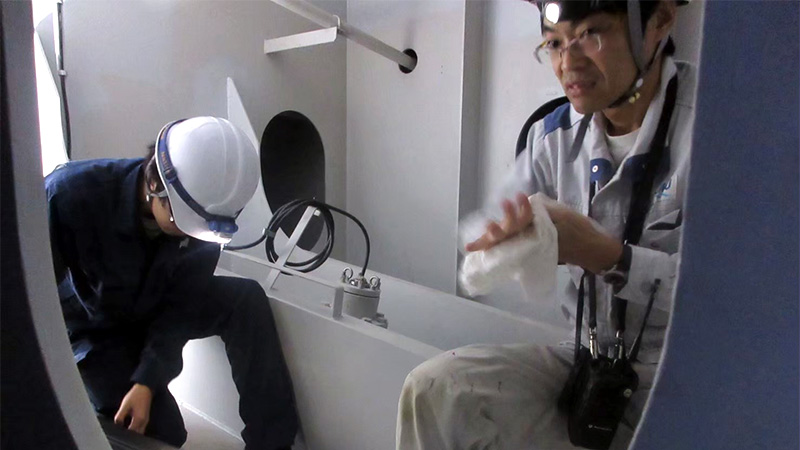 Measurement of the Stern Flow Field

Using a doppler sonar from Furuno, we measured the velocity of water current around the stern (the stern flow field). The doppler sonar we used this time, called a multi-layer current meter, was developed in the joint research of NYK, MTI, and Furuno, and can grasp the current velocity distribution of ship bottoms.
For enhancing the propulsion of propellers, it is important to understand what kinds of flow fields propellers are moving in. At the designing point we use CFD, but we can use the measured results to confirm if the CFD is correct or not. 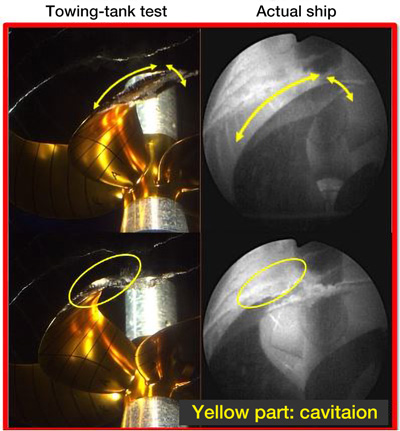 Measurement of Fluctuating Pressure of Stern

Along with fluctuating cavitation, generated by propeller rotation underwater, pressure fluctuation occurs in the water, which transmits the fluctuating pressure to the hull, where the water pressure on the stern’s planking also fluctuates. Since this pressure change also causes the hull to shake, it is estimated at the design phase so that excessive fluctuation pressure does not occur. This time, a pressure sensor was used to measure changes in water pressure acting on the stern planking. By comparing the result with the estimation at the design phase, it is possible to confirm the estimation accuracy and the error factor.

During this boarding, the measurements went smoothly. I appreciate the crew members’ great cooperation with our work. NYK and MTI secured valuable measurement data on propellers and more, JMU compared and analyzed the data with design values, and Furuno adjusted the measurement programs and confirmed data quality. Each company utilized its own specialized field, and as a result we were able to collect such interesting and useful data. This measurement might not have been achieved without the cooperation of all three critical entities: a shipping company, shipyard, and measuring-device manufacturer.

Utilization of the Data

By utilizing a part of the data collected through this measurement, we successfully improved propeller performance on a same-type ship (sister ship) by 1.2 percent. From now, if the detailed analysis of the measured data progresses, the accuracy verification of actual ship scale CFD will also progress. In the future, we plan to carry out measurements on various ship types other than containerships. Thus, I think, if we can build a cooperative structure with each company, collect data in actual sea, and utilize high-precision actual ship CFDs for designing hulls and propellers, it will lead to the realization of higher-performance ships. 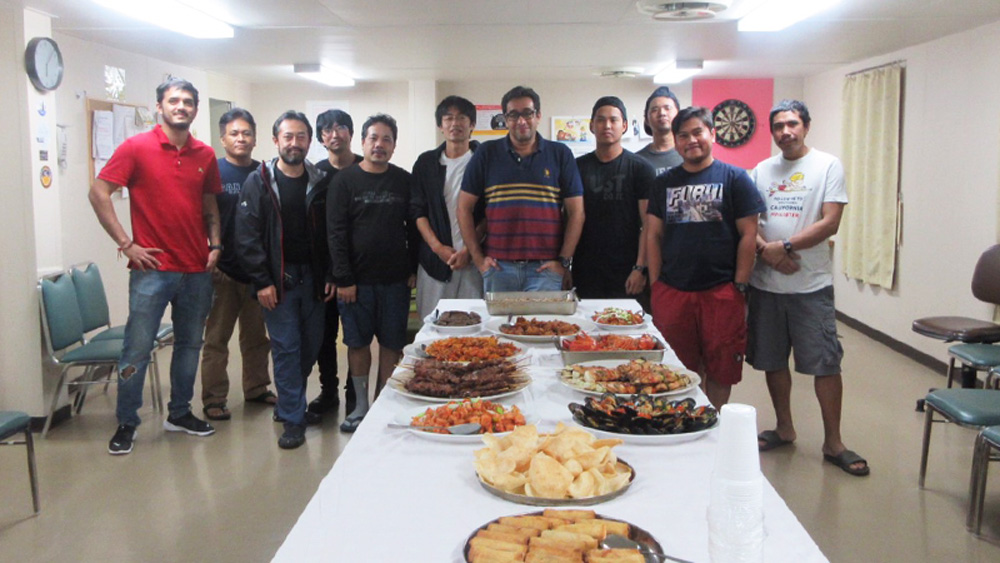 With crew members (Fourth from the left is Mr. Igarashi)

A short break in Antwerp, (Mr. Igarashi in on the right)