Development Story
for and by a Navigation Officer

*The job title is as of the publication date

Came to MTI with dreams

I joined NYK as a navigation officer in 2007 and, so far, have boarded tankers, bulkers, and pure car carriers. Until about ten years ago, it was said that a vessel was just like a solitary island in the ocean. Though ship-to-shore communications infrastructures improved greatly in the next decade, we still exchanged emails with our families only twice a day using a PC shared by all the crew members. My last voyage was in 2011, and I still remember that tickets were distributed to crew members once a month. With the ticket, we could use 200MB and thus saved the whole data traffic.
In 2012, I moved to a sales department of NYK. I supported making stowage plans of pure car carriers on land. In January 2016, I was seconded to MTI. Actually, I had had an idea for a new product since I joined NYK, so it’s not too much to say that I came to MTI to realize it.

First, I was surprised to find here an environment wherein I could conduct R&D with professional engineers from various fields. It’s a valuable opportunity to collaborate and work as a researcher together with those members. In such a situation, I have worked on R&D projects in a state of elation for fully utilizing my knowledge and experience as a seaman. 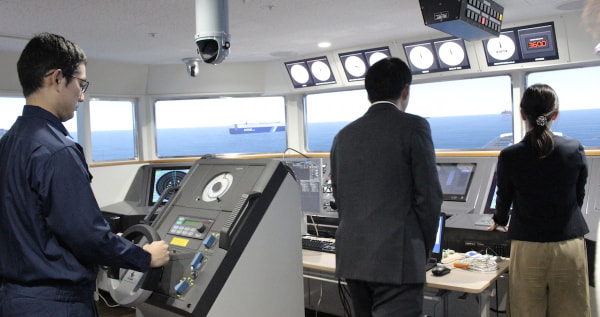 Like a navigation officer? Experiment utilizing the ship-handling simulator
(the quartermaster on the left is Mr. Sakaue).

As mentioned at the beginning, onboard communications infrastructures are overwhelmingly limited compared to onshore communications infrastructures, which is common knowledge for those who have been on board but isn’t generally known, and even some employees of shipping companies might not know it.
How about the onshore environment? The data transmission speed is becoming faster and faster. Ship navigation data, now obtainable from around the world, is analyzed by various methods and used, for example, in ongoing R&D projects on energy-saving and improvements in ship operational efficiency. At MTI as well, experts in diverse fields utilize various data and have achieved results in each specialized field. Here I thought, with what can I link so-called big data?

At MTI, we contributed to safe and efficient voyages by obtaining and analyzing ship machinery data. Meanwhile, what about navigational data? We can get worldwide weather data that consequently contribute to safe and efficient vessel operation, but there is another valuable data that cannot be obtained with sensor data but is essential for ship operation. That is the information recorded on marine charts. You might think of a compass or charts by the influence of a well-known animation, but a compass is ancient – here I must skip an overlong explanation and say simply that each tool has gradually evolved to date. Paper charts are still utilized and at the same time digitization of charts is realized.
This time I had a great opportunity to develop J-Marine NeCST, which is more advanced than digitized charts. The product digitizes various navigational information, which was conventionally recorded on paper charts, so it can easily accumulate data and link the various navigational information with big data. In addition, with ever-easier information sharing, it provides not only a cost advantage but can also contribute to safe vessel operation.

We have responsible work for each position on board: captain, first officer, second officer, and third officer. On my most recent voyage, I experienced being a second officer, who is mainly in charge of charts. This time, we put the concept of NYK’s captains’ “safety and efficiency” into production. We developed the product by assuming the actual use situation and making use of my onboard experience, so I’m sure that the product became for navigation officers by a navigation officer.

I think it’s a unique aspect of MTI that I could work on a development that is typical for navigation officers in a company where various experts are belong.

The chart on display can be overlapped with weather information to allow for
the preparation of the most optimal route plan.

Electronic information can be shared, thus allowing for smooth integration
between ships and land.

There is a trend in the direction of digitization and digitalization, but as mentioned before, some analog work remains on board.
MTI conducts experiments in a way that goes with the actual environment. The photo on the right shows the experiment of measuring frictional force of the floor using the pendulum friction meter at MTI’s YOKOHAMA LAB. I work on this experiment together with the sales department that I used to belong to. We digitize and utilize the data accumulated by these analog measuring methods. Even when we cannot digitize the data, we utilize it for site improvement in a different way. 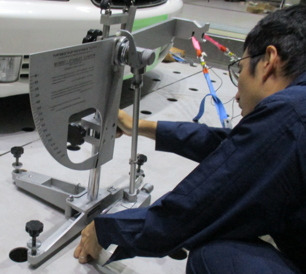 At MTI there are specialists who know the actual sites, and experts in various fields such as shipbuilding, nautical instrument, and data analysis with the experimental facility. In addition, the parent company, NYK, holds actual experimental fields such as vessels and ports. In such an environment, we can work on R&D projects with free thoughts and ideas; nonetheless, there are some difficult cases to realize considering the technical, time, and cost limitations.
Given that situation, I might not have realized “what I want to develop,” and I have a little concern about its realization. But, as a member of the NYK Group, I try my best to accelerate MTI where experts work on cutting-edge R&D.