Utilizing data in the field of dry-bulk shipping

■The data is used for the best decision

The Dry Bulk Division of Nippon Yusen Kaisha (NYK) has shifted its drive on data utilization into high gear since 2013 in partnership with the Group’s MTI, NYK Business Systems, and other entities. It has been advancing the installation of SIMS on bulkers, which system had mainly been mounted on containerships, along with developing an environment with easier access to data and thus engaging in the efficient use of data visualization for the improvement of operation/navigation. Amid all such initiatives, NYK developed “LiVE for Operator,” an application for vessel operators to help them make use of vessel’s big data such as SIMS data toward the realization of always safer and more-efficient vessel operation.
The above application collates information necessary in operations that used to be scattered in various places and learned through experience, so that the information can be shared by vessel operators toward the realization of optimum operation with reduced fuel consumption and continuous safe navigation. With this application, for instance, the company has conserved fuel by making the fuel consumption of moored ships visible.
NYK is also striving to promote more advanced initiatives from data visualization. One of the major risks in ship operation is the meteorological/hydrographic condition. With navigation in the North Pacific, for instance, fuel consumption is largely affected by the meteorological/hydrographic conditions, and coping with this type of risk has thus far partially depended on the experience and intuition of seafarers. Therefore, the company mounted a project that rendered the risk arising from meteorological/hydrographic conditions visible through “LiVE for Operator” and the latest analysis technology. It applied the “digital twin” technology that reproduced what happens in the real world onto the digital space. First, the performance of each vessel in actual waters was computed as a model on a computer. Based on the actual waterway performance model and the annual meteorological/hydrographic data on the actual routes, repeated simulations of voyages under different seasonal and sea conditions are carried out to quantify that risk. The technology also helps in studying the optimum margin for bunker oil, the risk of delay in arrival, and the distribution of speed. One of the main strengths of this project is its system that lets such information be shared among marine engineers, technical experts, and sales teams toward the realization of the best decision.

■Expanding the use of SIMS into long-term chartered ships

At present, about 80 ships in NYK’s dry-bulk fleet are equipped with SIMS, making the company the only dry-bulk operator that has installed loT equipment on this scale. The installation of SIMS started with company-owned ships and then later expanded to long-term chartered vessels from shipowners. More than 40 of the 80 ships equipped with the system are under long-term charter deals. NYK plans to install SIMS on all its main fleets in the future, with a source from the Dry Bulk Marine Quality Control Group claiming, “We have earned the understanding of many shipowners.”
The installation of SIMS will also generate major benefits for shipowners. NYK has developed “LiVE for Ship Manager,” an application for ship-management companies that will render the data from SIMS visible, and provided it to shipowners too. NYK marine engineers carefully explain to shipowners how the application is used, sometimes even talking to them over the phone while looking at the same screen. The company is promoting not only visualization but also “notification” so that calls or notifications will be automatically made at important times.
In such circumstances, there are also cases wherein new functions are mounted to reflect shipowners’ requests. One such case involves the function of comparing performance with a sister ship, wherein, under the premise that the involved shipowners have agreed, the data of a sister ship operated by NYK can be compared after hiding the sister ship’s name and the data that that shipowner wants to keep undisclosed. This initiative has triggered the rapid emergence of new ideas within NYK. By reflecting the requests of the business unit into the applications, the business unit itself is getting revitalized. This move is being promoted thanks to the entry of marine engineers and technical experts into the business unit.
Hiroshi Kawaguchi, General Manager of Dry Bulk Marine Quality Control Group, said, “We are on the same boat as customers, shipowners, and ship management companies, and we are carrying out activities based on the major premise that not stopping a ship is in everybody’s interest.” He stressed, “We aim to have the world’s number-one dry-bulk fleet and want to utilize new technology toward that end. When developing technologies, it is important to implement a Plan-Do-Check-Act (POCA) cycle for continuous improvement among the technical experts, marine engineers, and the business unit. The strength of our company lies in our ability to do this.” 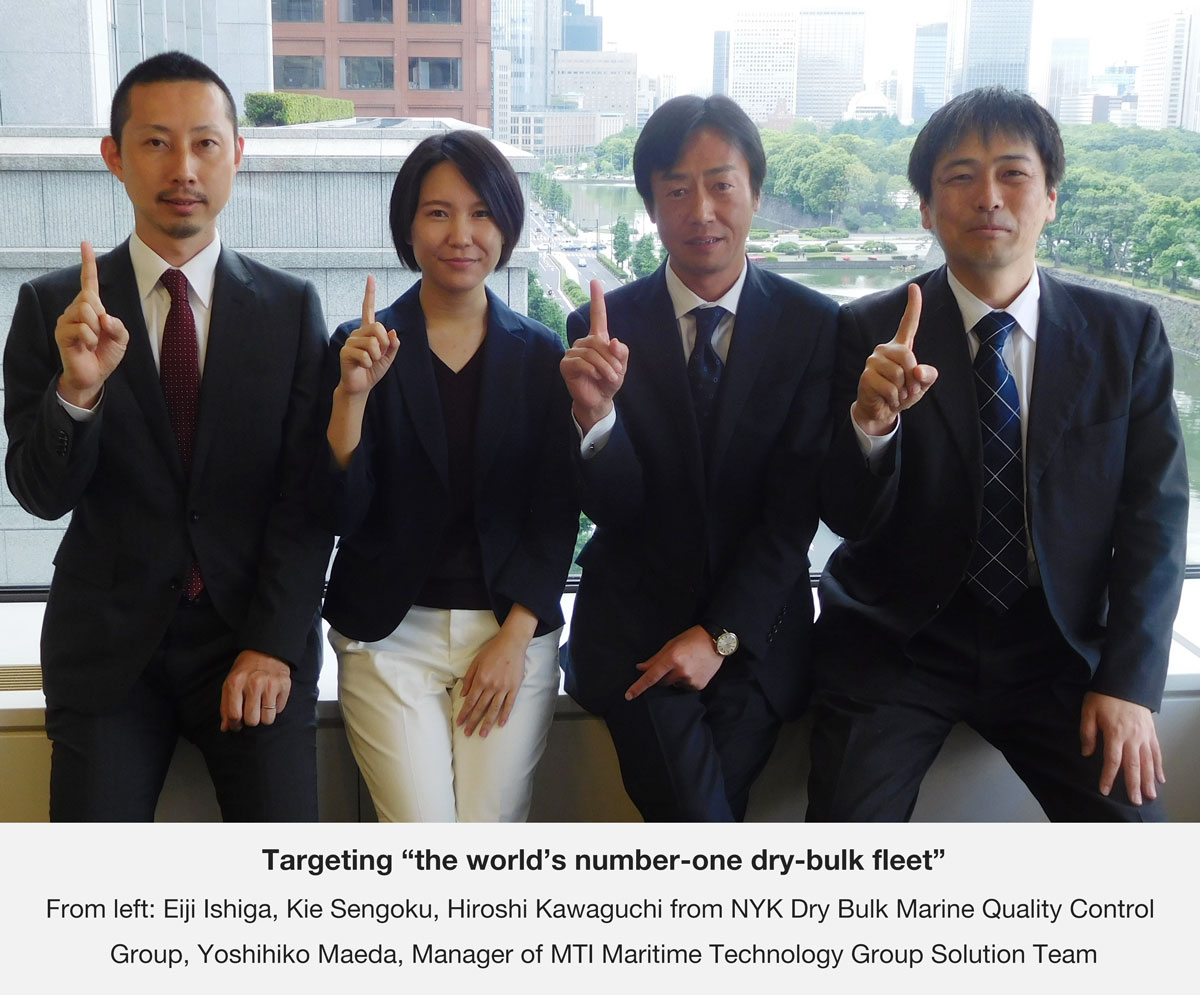