Nippon Yusen Kaisha (NYK) is currently engaged in various research and development (R&D) projects related to autonomous ships. The company has positioned autonomous ships as an extension of its drive to reduce the burden on seafarers, promote operational safety, and boost operational efficiency, indicating that it is not targeting a shift to unmanned ships. Amid the acceleration in its R&D initiatives that will contribute to the improvement of the current state of its business, a so-called autonomous ship will ultimately be realized.
One of NYK’s major projects is the “research on ship collision risk determination and autonomous ships” that NYK, MTI, and Japan Marine Science (JMS) are advancing together with Tokyo Keiki, Japan Radio Co. (JRC), and Furuno Electric. Under the program to develop technology that will support navigational officers in overcrowded waterways by reducing ship collision accidents, the target is to carry out actual ship testing in fiscal 2019.
Maneuvering a ship requires the repeated grasping of the condition of the ship and its surroundings (recognition), determination of collision risks (prediction and determination), and actual operation. In R&D related to automatically operated ships, all these stages will be approached toward the creation of navigation support tools that use augmented reality (AR) technology in the recognition stage, and autonomous ship operation technology (remote control) that will aid operation from an onshore facility in the operation stage.
Navigational officers have thus far predicted and determined collision risk based on their respective experiences, so there were individual differences in sensing risks. The project team is developing a system that will support the judgment of navigational officers by quantifying “sensibility based on their years of experience” in risk judgment by such persons as expert captains, and then providing alerts during navigation corresponding to the level of risk based on such information.
NYK introduced a part of such research in the presence of delegates from Japan’s Ministry of Land, Infrastructure, Transport and Tourism (MLIT), Nippon Kaiji Kyokai (ClassNK), its co-researchers Tokyo Keiki, JRC and Furuno Electric at the JMS in December 2017. Using a large-scale full-mission ship-handling simulator, NYK showed the process for converting into data how an expert captain predicts the approach of other ships and decides on how to avoid collision.

The research on manned autonomous ships also includes automatic collision avoidance through the detection of possible collision. One of the elemental technologies is automatic-maneuvering technology using artificial intelligence (Al), and the NYK Group is currently conducting joint research activities with Kobe University and with the University of Southern California (USC) in the U.S.
The research being undertaken by MTI and JMS with Kobe University, titled “A system development using artificial intelligence (Al) as core technology for navigation support system of coastal ships,” has been chosen as a new research theme for fiscal 2018 in MLIT’s Transportation Research and Technology Promotion Program. This research is developing a system that will support navigational officers by offsetting human errors, aiming to conduct demonstration experiments on actual ships with the use of the basic Al technology that has already been developed (i.e., technology for automatic collision avoidance in overcrowded waterways through the use of deep learning). The realization of automatic collision avoidance requires not only support in the recognition of risks and dangers but also in the determination of dangers and actions to avoid them, and this will be incorporated into the system. At the same time, the system will contribute to improving the work environment of seafarers.
The joint research with USC began in 2016 and will end in fiscal 2018. Under this research, the basic program will be developed for the Al in which a computer program will analyze the condition of other ships and then take avoidance measures in case there is a risk of collision. NYK provides the ship-maneuvering scenarios based on the maneuverability of the ship and knowledge of ship captains. By conducting trial and error of the Al program repeatedly through simulation, the team is developing the Al framework that will improve the collision-avoidance capacity of the program.
With regard to the possibility of Al in the area of navigational safety, Hideyuki Ando, Senior General Manager of the Maritime Technology Division at MTI, stated that, “Al today efficiently takes over the specific operations of human beings, and its strength is the ability to further advance the expert system that was actively developed in the past, and make it possess a learning function. By making it amass an overwhelming amount of experience that cannot be experienced by humans and repeatedly making it learn, it is possible that the Al will be able to pick up factors that resemble the intuition of highly experienced people, including the ability to strategize.” He added that, “Given the fact that a considerable number of accidents are said to be simply caused by human error, the main motivation in the R&D of Al is the reduction of the workload of humans and accidents by assisting humans through the positioning of computers, which constantly perform overwhelming information processing without being affected by concentration in other operations, fatigue, and stress.” As for the speed of technological development, he claimed that, “It is faster than we thought when the research started. I think that we will come to the phase in which this kind of technology will be soon introduced in coastal ships and other vessels.”

Accurately grasp the performance of the ship

One of the important data items for measuring the performance of a ship in actual waters is “the ship’s speed through water,” and doppler sonar is installed at the bottom of the bow to measure the speed of the ship.

Conventional doppler sonar sends ultrasonic waves into the water, records the sound waves that get reflected when they hit plankton and other underwater objects, and then derives the ship’s speed through the water from that frequency. It has a mechanism that measures the changes in frequency from the doppler effect that occurs when the ship is moving. However, the boundary layer wherein the seawater is pulled to the bottom of the ship, and the uneven ocean currents brought about by the water depth affected the measured data, so it was difficult to accurately measure the ship’s speed through water. With this, NYK, MTI, and Furuno Electric began in 2013 to develop a “Multi-Layered Doppler Sonar (MLDS)” that introduced a new measurement method.

The MLDS measures a ship’s speed through water by dividing the direction of depth into multiple layers. By eliminating the data deemed to have been affected by the ocean current and other factors from the measured layers, more-precise data can be obtained. MLDS uses technology patented by NYK and Furuno Electric and can be introduced by changing the software of the conventional doppler sonar. Performance testing is currently being conducted by installing the system onto five of NYK’s ships, including a pure car/truck carrier (PCTC), tanker, and containership. 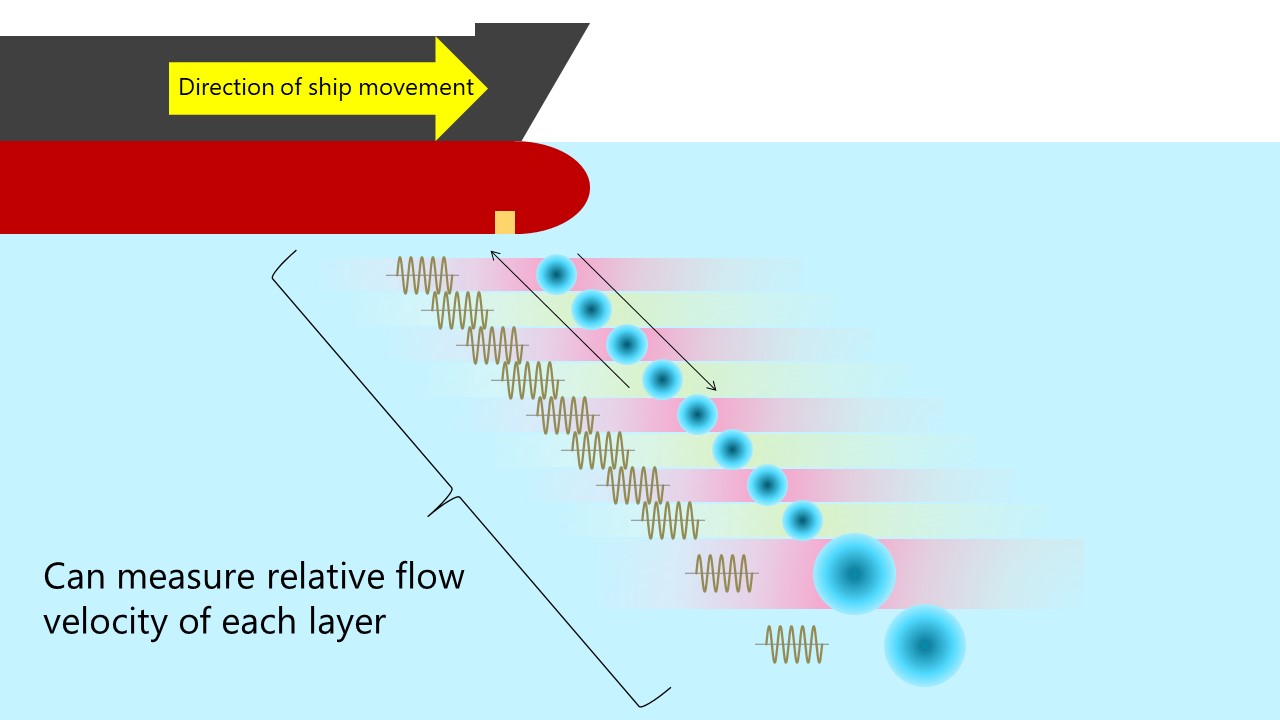 Takashi Yonezawa, manager of the Ship Innovation Team of MTl’s Marine Technology Division, said that, “Ship’s speed through water is one of the basic data when analyzing the performance of a ship. Through MLDS measurement, the original performance of the ship can be accurately measured, and the effect of modification and upgrade can be properly evaluated.” If the measurement errors that arise due to the ocean currents and other factors are minimized, and ship’s speed through water that is close to the actual speed is measured, then it may lead to a more accurate analysis of performance.

“If we were alone, then this is not something that we could have conceived. We could not even mount it and test it on an actual ship. Furuno Electric has always been making equipment for fishing vessels in close partnership with customers. It was difficult to adopt this method into cargo ships, but we were able to go back to the original method in this project,” said Masahiko Mushiake, chief engineer and group leader in the Acoustic Engineering Section Research & Development Department Product Designing, Development & Value-engineering Head Office Marine Electronic Products Division of Furuno Electric.

By applying this technology, NYK and MTI, together with Japan Marine United Corporation (JMU), succeeded in the joint development of propellers that improve fuel efficiency.

Information about the flow field around a propeller is highly important in propeller design, but it’s most difficult to grasp accurately. Thus, MLDS was adopted in the project to measure the flow velocity at the stern and enhance the propeller design. Measurement was performed on a 14,000 TEU containership from the Suez Canal to Rotterdam. Cavitation around the propeller was observed with a borescope and a high-speed camera at the same time. The results were fed back to the propeller design of the subsequent sister vessels and led to the new design with 1.2% higher efficiency.

NYK will utilize the technology to improve the accuracy of fuel-consumption analysis and develop energy-efficient ships.