Tadaaki Naito, President of Nippon Yusen Kaisha (NYK), has kept true to his campaign to promote the key phrase “staying half a step ahead” and differentiate NYK from other companies through technical prowess and other aspects. Such policy has become even clearer under the company’s new medium-term management plan that began in fiscal 2018, as NYK has positioned “Digitalization and Green” as its destination.

■Always staying half a step ahead

– Under “Staying Ahead 2022 with Digitalization and Green,” the new five-year medium-term management plan of the NYK Group that kicked off in fiscal 2018, you have hammered out a policy that calls for pouring more effort into the field of technology.

The title “Staying Ahead” indicates our resolve to further differentiate our company, as we did through “creative solutions” under our previous plan that was dubbed “More Than Shipping 2018,” to build the spirit for “always being half a step ahead of other companies,” and to conduct our business in anticipation of the future.
“Digitalization and Green” (D&G) is the path we must take in order to survive, and we will promote this with our entire Group. Everyone is engaged in D&G nowadays, but the point of our drive is that we are more committed to it, showing we are heading in that direction. The medium-term plan is our dream, which will turn us into an ideal company. And D&G is the key for our dream to come true.

– How do you view the current state of the shipping industry and NYK?

The shipping industry is a niche industry, so to speak, but I feel that we have come to an era where we can no longer make it through our own efforts alone as we have done thus far. It is crucial to collaborate not only with other companies in the same industry but also with other industries. Investments are also shifting to the so-called era of software, from being overly inclined toward hardware in the past. Digitalization is the embodiment of software, and with the help of software, we will dare to differentiate our company from the rest.

– What is the basic policy of the NYK Group on technological development?

We will optimize the entire supply chain and try to create new values in the field of environment by fusing the core competence that we have amassed, such as on-site capability and global network, with elements of commercialization of cutting-edge systems, the Internet of Things (loT), and other technologies created by society.

– Can you give a specific initiative?

The use of SIMS (Ship Information Management System), a system for gathering and analyzing operation data on a real-time basis, is the representative example of our company’s drive toward digitalization. We want to analyze massive amounts of accumulated operation data with the help of Al (artificial intelligence), and then use the results in predicting dangers and defects or failures during navigation. I think that we are still halfway to reaching our goal, and we will be able to visualize the future of new ships, such as autonomous ships, once we get there.
We are incorporating existing and applied technologies that we own, related to safe and efficient operation and preventive maintenance, into loT. Our company has been advancing this kind of initiative for quite a while now, and as a result we are already creating solutions that can be put into practical use. We have completed the “visualization” of operation information and are now promoting ways for “notification based on preset rules” and for “preventive maintenance.” Examples of our initiatives in this area include the Kirari NINJA, a device that automatically photographs the insides of engine cylinders, and the Kirari MUSE, an engine diagnostics tool that identifies the engine condition through the sound – both of which lead us towards Condition-Based Maintenance (CBM). We are conducting various research studies on other matters, as well as advancing collaboration with other companies.
The performance of a ship on actual waterways is extremely important. The utilization of data on performance on actual waterways that can be grasped through loT will become a core competence, and that will lead to the improvement of the hardware and enhancement of operation.

– What is the path toward the realization of autonomous ships?

I think that ships will not become “unmanned” but will continue to be “manned” with at least a limited number of crew, because operating a ship with an extremely high value unmanned in the ocean where it can encounter various external elements of risk is very dangerous, and I doubt anyone would do so. We constantly target advanced operational safety. Having said that, I think that the final form of ships will be “manned autonomous ships” wherein final decisions will be made by crews onboard while they communicate with the onshore by making use of data.

■Research and development (R&D) institutions in the NYK Group

– What position do you think NYK occupies in the world in terms of technological development?

If you look at the world, you will see that each country and region has its own fortes, such as environment-related technology for Europe, ship-shore data exchange for Japan and Europe, and offshore for South Korea and Singapore. Now if you ask what position we currently hold there, then I would say that I honestly do not know. However, our Group has several R&D institutions: MTI, Japan Marine Science (JMS), NYK Business Systems (NBS), and Symphony Creative Solutions (SCS). It is quite rare to see a shipping/logistics company with many R&D institutions under its umbrella, so we want to take advantage of what we have.

– You have emphasized the importance of cooperation with other companies in the field of technological development, as well as open innovation.

Diversity is crucial when creating new things. Something new may arise from an unexpected opportunity, so it would be best if we do not limit ourselves to dealing with certain kinds of people right from the start. If we can use technologies that already exist in other industries, then I think we can also borrow elemental technologies and develop something new together.

– Will there be changes in the human resources that you seek?

For our “D&G” initiative we need people full of curiosity and a spirit for challenge. We want to focus more attention on these kinds of people. Yet people keen to defend the company will also be needed, so it is important to build a diverse manpower if we also look at the internal needs.

– What are your policies pertaining to the Green initiative?

We will act from three angles. The first is compliance with rules, including the sulfur oxide (SOx) emission regulation in 2020. The second is the reduction of carbon dioxide (CO2) emissions, and since this is directly linked to energy saving, we will promote the enhancement of efficiency in the operation and hardware sides too. The third is commercialization in the environment field, and we are engaged in this area mainly through the Green Business Team that we put up in the Bulk and Energy Transport Control Group effective April 1 this year.

– What areas in particular are promising in terms of the commercialization of Green?

There are various areas of interest, such as wind power generation, biomass, hydrogen carriers, and green terminals. One of the commercialization projects that we have already concluded is the wind power generation project at the completed car terminal in Belgium’s Zeebrugge port. It will be wonderful if we can develop businesses that raise our revenues/profits while being friendly to the environment, including projects on renewable energy.

– How will you comply with the SOx regulations in 2020?

We operate a little less than 800 ships, of which about 250 are owned. There are three ways to comply with the SOx regulations: the installation of scrubbers, the use of fuel gas such as LNG and LPG, and the use of fuel oil that complies with the regulations. We will go about compliance through a portfolio that is not biased to any one of those methods.

– How do you envision the state of shipping in the future, when technology has become sophisticated and advanced?

There is one scene in the “Back to the Future” movie that made an impression on me, the one in which the DeLorean car flew from the future, and then flew again by picking up the trash that fell around it and turning it to energy for the car. In the same way, the day will come when ships will also be powered by renewable energy with optimum efficiency. While I think that progress in the maritime industry is rather slow, the pace of progress is now picking up, so I look forward to seeing what lies ahead in the future. 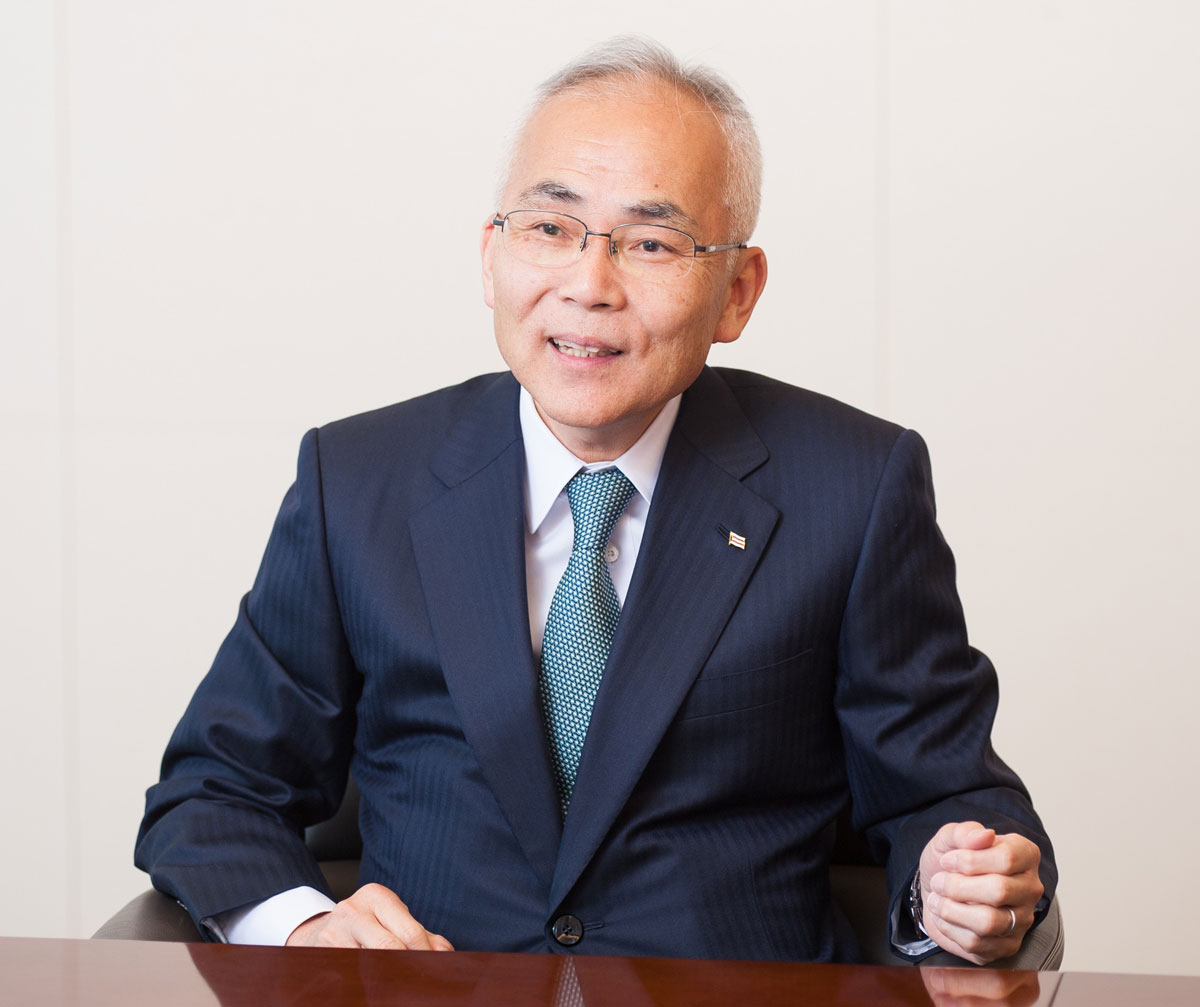